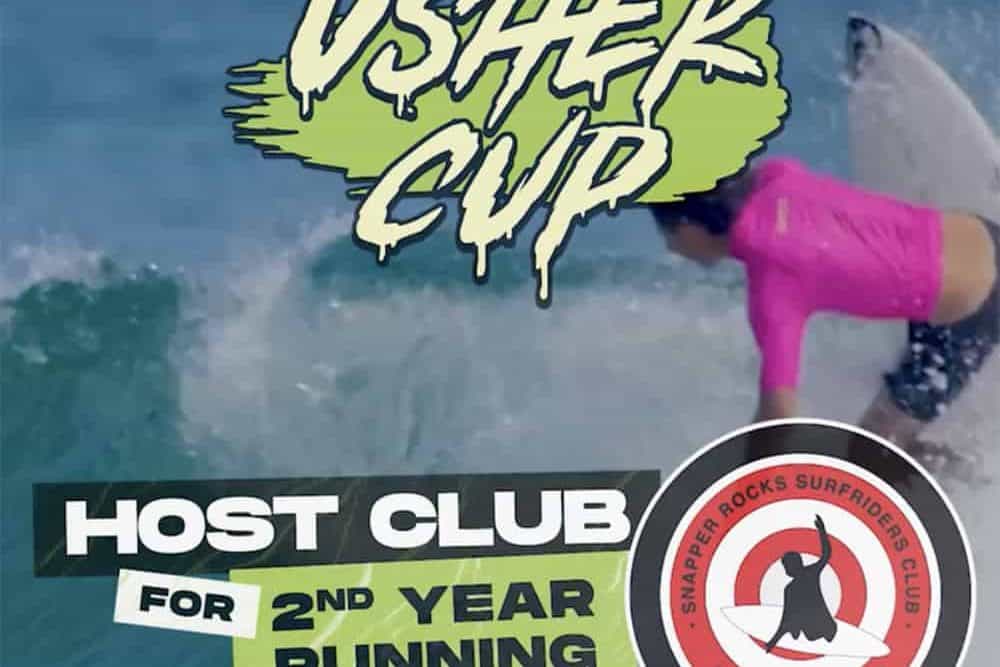 Coming back bigger and better than before, Usher Cup is thrilled to once again be joined by Snapper Rocks Surfriders Club as the Host Club and location for the second instalment of the annual surf contest.

The prime stretch of beach located at Snapper Rocks is often boasted about for being both a man-made miracle and a natural creation, thus providing the optimal location and conditions for competitors of all levels.

Hosting the Usher Cup at Snapper Rocks was an unquestionable decision for event Co-founders Theodore Vairaktaris and Wayne ‘Rabbit’ Bartholomew.

Snapper Rocks Surfriders Club (SRSC) was originally formed in 1964, today creating a home for over 100 junior surfers ranging from under 6’s to the highly competitive junior groms. The SRSC has a strong ethos of nurturing the next generation of elite competitive surfers from grassroots to global.

With a colourful history decorated with world championship competitors, supporting the grassroots level of surfing is highly regarded by Club President, Jay Phillips.

“The grassroots-level is where it’s all at – it’s where the start of surfing is in any boardriders club throughout Australia,” says Philips. “The Usher Cup is an awesome opportunity for local surfers to make good money on home soil and in home waters.”

The past two years have been particularly challenging for young surfers, with numerous national competitions and local level training cancelled due to coronavirus. The Usher Cup yet again presents the opportunity for those trying to move to the next level with the funds they need to progress.

“There’s some great prize money on offer for the winners of the men’s and women’s divisions,” says Phillips. Both divisions will compete for equal prize money, with $7k up for grabs for the final champions.

The first Cup saw not one, but two competitors travel the globe for the world championship tour. The clubs are coming back to Snapper Rocks this year, with the invitation extended to several interstate clubs ahead of border restrictions easing.

Holding a hometown advantage to the sort after break, this is SRSC’s opportunity for them to take the Usher Cup win and trophy from last year’s winners, Angourie boardriders.

The second event is set to take place from Friday 28th  to Sunday 30th January 2022, taking over the coastline for three days of competition.