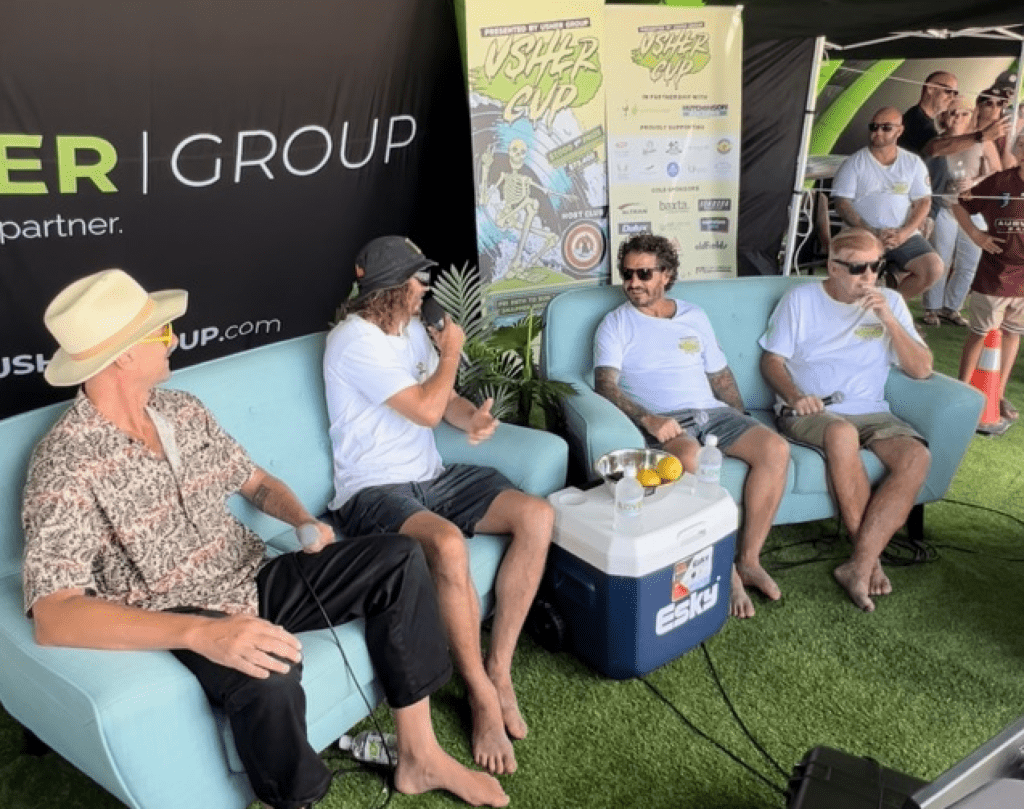 Year one was a huge success and set new benchmarks for grassroots surf contests and then in year two, the Usher Cup welcomed in an international audience with the events live stream broadcast watched by tens of thousands of people all over the world.

In 2023, the transformation continues with Usher Cup 3 taking on a truly international flavour, the announcement made just before the commencement of the contests finals by event co-founder Theodore Vairaktaris.

The announcement music to the ears of Gold Coast City councillor Gail O’Neill saying the surf competition provided a much-needed boost to the Southern end of the city.

“Woo-hoo, it is fantastic for this area, congratulations to the organisers and what a fantastic announcement to make today and especially here at Snapper.”

“The southern end of the Gold Coast, as you know has done it really tough the last couple of years, so to have an event like this bring board riding clubs to this area, stay in the area, spend money, have a great time and with all the fund-raising money going to local charities, fantastic.”

With tens of thousands tuning in to the live stream to watch some of the sport’s most exciting talent surf the iconic Snapper Rocks break, the Usher Cup which also was destined to expand in 2023, Wayne Bartholomew saying the inclusion of six international teams set to transform the event and grassroots surfing.

“It has been an organic growth and a bit of brainstorming with Theo and this year we said lets blow it up and let’s get North Narrabeen who are the Australian champions here, let’s get Torquay the number one club in Victoria, North Shelly that incredible underground club that’s always right there with great surfers and they came and we thought we are onto a good thing here, we have invited them and they have come, I mean who wouldn’t want to come to Snapper and so we thought lets invite some internationals.”

“I think it’s the beginning of as great exchange, this could go anywhere, we certainly don’t own this space, but what we are going to do is usher it in.”

Just like the events sponsorship money, which was collected in record time, Theo said the acceptances from the six international teams were almost immediate, the contest team already making plans for a uniquely Australian cultural experience.

“Real Aussie spirit, they will experience our culture, see how we unite the entire boardriding community together, this whole three days together we have integrated as one community. There’s been three different sectors of this town, the construction industry, the not-for-profit charities that nurture our city and all the Boardriders that come together, we love, we surf, and we support each other, it couldn’t be any better.”

To keep up to date with the latest developments from Usher Cup, visit ushercup.com