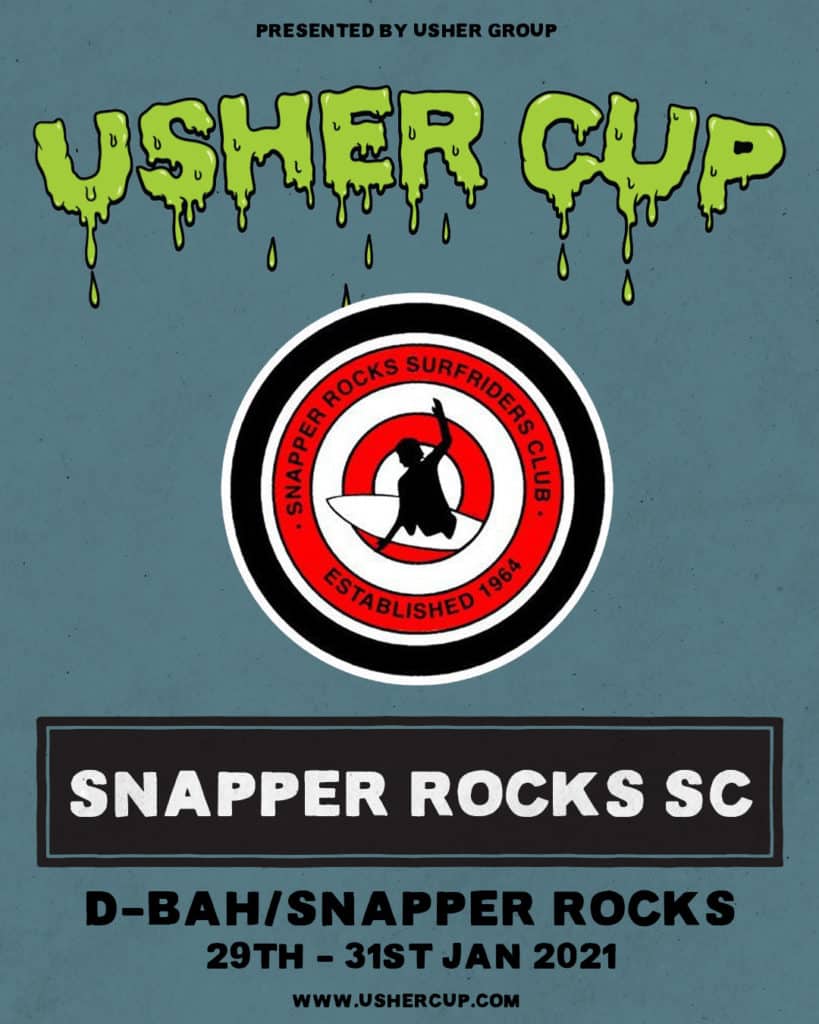 The Snapper Rocks Surfriders Club is proud to be hosting the inaugural Usher Cup from the 29th to the 31st of January 2021.

Established in 1964, the Snapper rocks Surf Riders Club, (SRSC) has competing with distinction at the top competition level for over thirty years. SRSC has produced eleven world champion surfers to date, while the club’s riders have also held various state and national titles.

The Snapper Rocks club is currently home to over one hundred junior surfers from under six division through to the highly competitive junior groms. The SRSC is a family-orientated grass roots club with a strong emphasis on nurturing the next generation of surf stars.

When it comes to junior excellence, the Snapper Rocks Surfriders Club are in a league of their own, the club producing an incredible seven world champions, testament to its impressive junior development programs.

It was the Snapper Rocks juniors who suffered the most as COVID-19 restrictions put hold to the junior training programs, the pandemic also seeing a huge reduction in the number of junior events held around the country. Club President Jay Phillips saying the announcement of the inaugural Usher Cup has provided a welcome boost to the junior surfing fraternity.

“It was a hard time this year, usually, they’re out and about travelling and competing around the world,” Phillips said.

The Usher Cup contest provides surfers, especially amateurs, an opportunity to showcase themselves and demonstrate that they are emerging forces in the surfing world.

“There is some great prize money on offer for the winners of the men’s and women’s divisions, it’s an awesome opportunity for local surfers to make good money here on home soil and in-home waters.”

Mr Phillips said the club’s nominations for the inaugural Usher Cup haven’t yet been finalised, however exciting surfers Jagger Bartholemew, Sheldon Simkus and Mitch Parkinson along with female surfer Kobie Enright or Piper Harrison are in line to represent the club at the Usher Cup being held at Duranbah and Snapper Rocks from the 29th to the 31st January 2021.

When it comes to teams’ events, Snapper has won them all, including the biggest surfing event in Australia, the Jim Beam Surftag National final held at Curl Curl in Sydney.

Locally, the club also holds the record for the most wins in both the Kirra Teams Challenge and the Straddie Assault Teams events and holds titles in the team QCSS and QSS events, making Snapper the most prolific winner of team events contests of any club in Australia.

When it comes to individual accomplishments, Snapper is home to a cavalcade of international stars and surfers who have excelled on the world stage including Stephanie Gilmore, former world tour competitor and aerial specialist Josh Kerr, Dean Morrison, Joel Parkinson, and Mitch Crews.