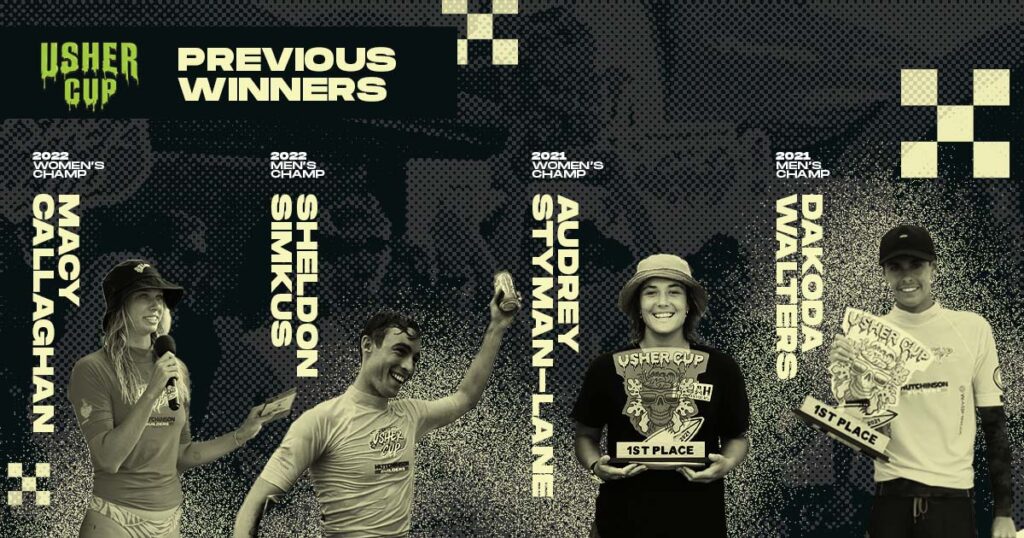 The COVID 19 pandemic had brought, business and many communities to their knees as lockdowns and illness resulted in the cancellation of sporting events around the globe.

Determined to provide grass roots surfing with a boost as borders started to re-open, Usher Cup co-founders Wayne “Rabbit” Bartholomew and Theodore Vairaktaris launched a unique, hybrid contest, aimed at reuniting board riders’ clubs who had been forced out of the water, whilst also providing an opportunity for emerging surfers to test themselves against the best from around Australia.

Establishing an event with equal prizemoney for male and female athletes, with the opportunities for clubs to send their best to Snapper Rocks in search of the team’s honours and prize money on offer.

Pleasingly, a host of Usher cup finalists and winners have used the prizemoney collected on the Gold Coast to chase their professional careers.

In 2021, last minute entrants Angourie who had originally declined an invitation to take part in the inaugural event dominated the final day of competition winning two of the three titles on offer including the Usher Cup teams event.

Contesting the men’s decider, Dakota Walters and Snapper Rocks Jaggar Bartholomew traded scoring jabs during the men’s decider, Walters taking an early lead before Bartholomew mounted a late charge, the snapper rocks favourite falling agonisingly short on the last wave of the contest with the Angourie Pocket Rocket Walters etching his name in contest folklore as the first ever winner of the Usher Cup with a final score or 15:43, Jaggar second with 15:27 points, Reef Hazelwood 12:40 and Liam O’Brien 11:43.

The 2021 women’s final also provided spectators on the beach with a close fought, entertaining contest with the result again going down to the wire. With less than a minute on the clock and three surfers locked on equal points, Duranbah’s Audrey Styman-Lane, surfing her first contest in six years broke the deadlock with a brilliant final wave to claim the women’s crown with a score of 13:90 from Dimity Stoyle on 12:97, Kobie Enright 12:87 with Jade Wheatley 4th.

In 2022 after working their way through a full field of 46 competitors, Charlotte Mulley, Ellie J Brooks, Keely Andrews, and Macy Callaghan took part in the 30-minute final.

As she had done during her heat surfs, Macy Callaghan applied the pressure on her rivals with a brilliant 8:17 wave score, however Brooks ensured the final would go down to the buzzer, the Miami surfer holding a slender lead heading into the final sixty seconds of the event before North Shelley’s Callaghan landed a telling blow, her 5.77 ride enough to secure top spot and the $7,000 winners’ cheque.

The Hog once again showed the competitive spirit which saw him become such a competitive force on the ASP, initiating a paddle battle which resulted in a 7.83-point ride and the early lead. With home ground advantage and vocal support from the beach, Snapper Rocks Sheldon Simkus scored back-to-back 7.07 and 7.70 rides to pass Hedge on the leader board and claim the $7,000 winner’s prize, and the Usher Cup club champion title for Snapper Rocks with 2021 runner up Jaggar Bartholomew finishing in third place, ahead of Lorentson.

With a host of International competitors and new clubs making their way to the Gold Coast for Usher Cup 2023 being held at Snapper Rocks from the 19th to the 22nd of January, we’re ready for another chapter to be written into contest history with the crowning of two new individual winners, along with the inaugural World Club Challenge.

To keep up to date with all the latest Usher Cup News, make sure you visit

www.ushercup.com Usher Cup 2023 is proudly supported by Tourism and Events Queensland & the City Of Gold Coast.