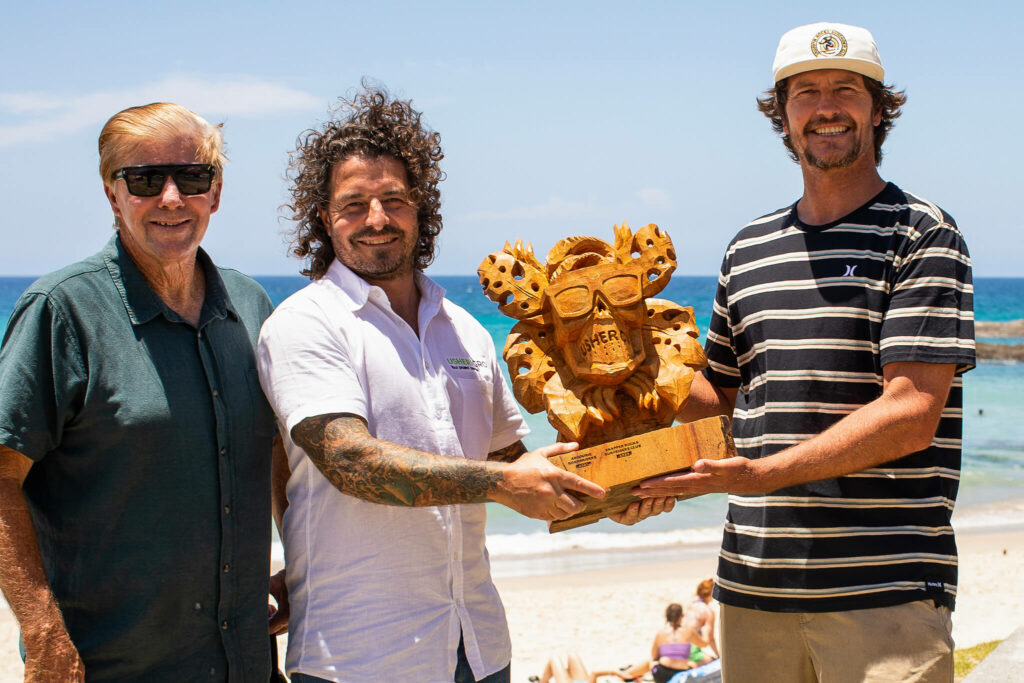 It’s been spoken about for twelve months and this week, the Usher Cup “World Club Challenge” became a reality, the event to be held at Snapper Rocks from the 19th to the 22nd of January 2023 official launched by event co-founder Theodore Vairaktaris.

“Today we are here to announce and launch the third instalment of the Usher Cup event, make no mistake ladies and gentlemen, we are about to write history and be written into the history books, it’s a world first, Usher Cup is here delivering with our host club Snapper rocks surf riders club the world first ever World club challenge here at snapper rocks on the Gold Coast.” Theodore said.

The inclusion of seven international teams, joining twenty-four of Australia’s leading boardriders clubs creating an environment where some of the worlds emerging surf stars will test their skills on one of the world’s most iconic surf breaks with Rabbit saying the sand bottom point break holds iconic status around the globe.

“It’s amazing when you go around the world, you go to these classic places like Trestles in California or the North Shore of Oahu and all the gromets, they want to come and surf snapper rocks, it’s a super famous spot they want to get a wave on the super bank and maybe go and get a wave at Kirra or something, these are some of the best sand bottom point breaks on the planet and it’s a real destination and a real blessing to be able to have the event at Snapper Rocks and for the Snapper club to be hosting it.” Wayne “Rabbit” Bartholomew.

Teams from Indonesia, Japan, Hawaii, New Zealand and the West Coast of the United States are assembling talented squads filled with emerging and established talent, for many the Usher Cup is a springboard into the professional ranks, while for the youngest competitors, the event is an official pathway as they build towards competing for a place on the 2032 Olympic team.

“We have 144 surfers competing for club honours and their own individual prize money, this year we have a whopping over eighty thousand dollars of prize pool for all our competitors and I would really like to thank Tourism Queensland, Division fourteen Councillor Gail O’Neil and our major sponsor Hutchinsons Builders who have been with us since day one, they have been on this journey, Hutchinsons builders have been such a massive supporter of this event with the Usher Group and what that means is that we have managed to raise over one hundred and ten thousand dollars for ten amazing charities here on the Gold Coast. Ten grass roots charities who that make a positive impact to our community.”

This year’s event is providing action in and out of the water with the inaugural Cooly Summer Vibes FREE family music event being held over the weekend in Queen Elizabeth Park Coolangatta. The Coolangatta markets and associated food trucks will also be in the park which will double as a live site with every second of the contest action streamed to the big screen.

Volunteering Gold Coast are running a free shuttle service from Coolangatta to the contest site, while a number of Swell art instillations will be positioned along the walkway for those looking to get their steps up.

In true Usher Cup fashion we are bigger and better every year, this year we have got the inclusion of the Cooly Summer Vibes free family music event happening here at Queen Elizabeth Park, we have drop and ride facilities, we’ve in collaboration with the Coolangatta markets who are going to be running their markets over the weekend and we are in collaboration with the girls from the Swell festival who have hand-picked artists to install artworks along thew whole boardwalk, so that means this Usher Cup event is creating an economic footprint from Queen Elizabeth park, all the way down here to Snapper Rocks for the Gold Coast and we are super pumped about it.”

For Snapper Rocks Surf Riders Club president Jay Phillips, the establishment of an international board riders surf contest on the Gold Coast is huge news.

“I can’t believe our club is hosting the biggest event of all time in Australian surfing history and we couldn’t be prouder of what we are doing at our club with our development programs and stuff like that, but it everything comes into line with the sand and the swell, I think there is going to be some amazing surfing going on.” Phillips said.

The four-day Usher Cup surf contest gets underway on the 19th of January with the final day of surf action scheduled for the 22nd. The event proudly supported by Tourism and Events Queensland, the Usher Group and the City of Gold Coast.